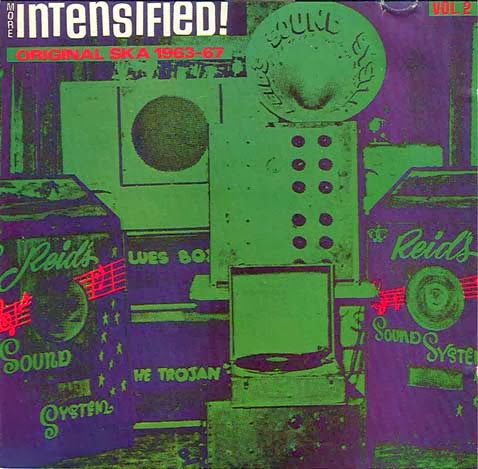 I think it was around 1985 when I first heard this album. Someone had given my brother a copy of both this album and Club Ska '67 (another equally outstanding compilation that I was seriously considering posting instead of this one - maybe I'll do that sometime soon (well, that was quick - see the next post)) dubbed onto a long-playing cassette, and he loaned it to me 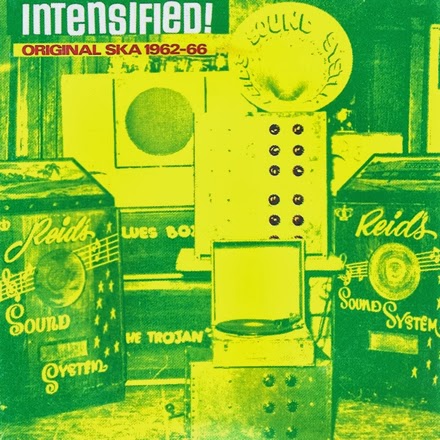 one day. More Intensified! was the follow-up to Intensified! Original Ska 1962-1966, released in 1979, a year earlier. I had been fully into the whole British ska revival/2 Tone genre of the late '70s/early '80s, but I hadn't had much exposure to the original '60s songs and sources of that movement. To be frank, by the mid-'80s, with the demise of The Specials, The Selecter and The English Beat, and Madness's shift towards the pop mainstream, that initial ska explosion had all but petered out. The next wave of the ska revival, under development in Australia, Japan, several other European countries and in U.S. locations such as Orange County, California (Fishbone, The Untouchables) and New York (Operation Ivy), was still a couple of years away from completely breaking out. So in a way, I was looking for something to fill the ska void . . . and these taped albums worked out nicely.

From the first song on the tape, "Six and Seven Books of Moses", I was hooked. As the album's name implies, all of the songs on this compilation were recorded in Kingston, Jamaica between 1963 and 1967, the heyday of ska in that country. Here's the track listing:

While ska was huge in Jamaica and much of the Caribbean, what's remarkable is that it went all but unheard and unnoticed by most of the rest of the world, which was immersed in Beatlemania during that period. Except for brief flashes of recognition (The Beatles included a brief ska bridge in their 1963 song "I Call Your Name"; ska bands played at the 1964 New York World's Fair), ska was for all intents and purposes an underground sound. By the late '60s, it had all but faded away, evolving into the slower, heavier rhythms of reggae. If it weren't for a couple of 1970s Coventry youngsters who grew up hearing this music and decided to try to emulate it - creating the influential 2 Tone sound - ska might have gone the way of calypso, another once-popular tropical genre now almost wholly forgotten.

In any event, I couldn't believe how great these songs were! This disc is full of rarities (like Marguerita's "Woman Come") and classics (such as Don Drummond's "Man In The Street"). Personal favorites include Lord Brynner's "Congo War", a summary of the mid-60s conflict (he even names most of the major players); Stranger Cole's "Run Joe"; and the odd and funny proto-rap of "The Great Wuga Wuga" by the great Sir Lord Comic.

In some cases, they had to dig deep to track down these prime cuts - many of the songs on this compilation were dubbed directly from the vinyl disc, due to the unavailability of the original master recordings.

I taped a copy of this cassette for my own use, and played it to death for years before finding and purchasing this album on CD. This has been out-of-print for decades, but here it is for you to enjoy: More Intensified! Volume 2 - Original Ska 1963-67, released in 1980 on Mango Records, a subsidiary of Island Records. Have a listen and let me know what you think.