The Crabs - Sand And Sea 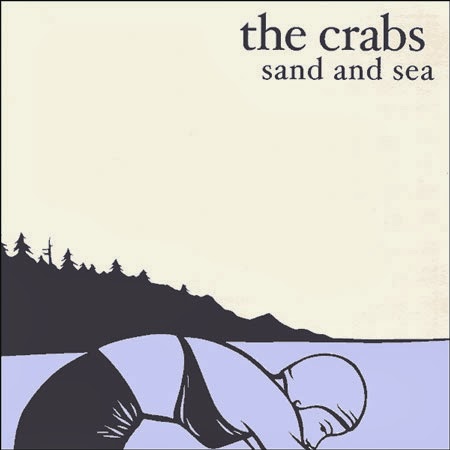 My first offering to my blog is the final album by the nearly forgotten Washington State band The Crabs, who recorded for K Records in the mid-to-late 1990s. I happened upon this band almost a decade ago, mainly due to one song, "End Of The World".

I first heard this song about nine years ago while driving late one evening on I-95 in southwestern Rhode Island, on my way to a rendezvous with the poker tables at Foxwoods in Connecticut. Radio, on the whole, kinda sucks in Rhode Island, with the once-mighty WRIU, the University of Rhode Island's student-run station, a pale shadow of the awe-inspiring and cutting-edge alternative music power it wielded in the '80s and '90s.

(Just as an aside, someone should do a study of the sorry state of college radio in America nowadays. I don't know whether it's the Internet, the Telecommunications Act of 1996, video games, Ipods or general student lackadaisical-ness (is that a word?) that can be blamed. But I think it can safely be said that, in general, college radio ain't like it used to be. Most of the stations seem content to play Top 40 crap you can hear on any Clear Channel station, or watered-down "alternative" bands (like Coldplay or Fall Out Boy). What happened to the groundbreakers, the experimentalists? College DJs broke tons of good bands in this country, bands that went on to become HUGE. Examples? Gee, I don't know . . . how about R.E.M., U2, The Pixies, The Police, The Chili Peppers and The Smiths, for just a small sampling? I remember the first time I heard Gang of Four's "I Found That Essence Rare", on a college station out of the Boston area - I just about died! Even my alma mater's sorry-ass little low power student-run station, WRNV at the Naval Academy, had in its day a fair share of open-minded, hep midshipmen who weren't afraid to play some crazy shit and have some fun doing it. Nowadays, that sort of spirit at ANY college station appears to come along very rarely. But I digress . . .)

Anyway, like I said, WRIU sucks now, and sucked back then too. I started scanning the radio dial, looking for ANYTHING that sounded new and interesting. Somehow, my tuner found a cool little college station called WHUS, run out of the University of Connecticut at Storrs. The song the station was playing was simple but engaging, carried along by a charmingly nagging little Farfisa organ melody and boom-splat drumming. The singer didn't have a classically trained voice, but for some reason, his plaintive tone seemed to fit the song to a T:

I was transfixed for those three minutes, staring out into the night and zooming down 95, all the while taking in every note and word. At the break, the organ launched into a sweetly sad, chiming little thing that just about slayed me! Wow.


The moment the song was over, I grabbed my phone and dialed the station to find out who that band and what that song was. The female DJ who answered told me the song was called "End Of The World", done by a band from the Pacific Northwest called The Crabs. 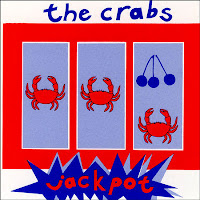 When I got home from Foxwoods the next day (yeah, I won), I did a little research on the band. The Crabs were originally Jonn Lunsford and Lisa Jackson, who started the band in 1992 in Portland, OR and were signed to K Records, Calvin Johnson's Olympia, WA label best known for being the home of the renowned indie/twee pop band Beat Happening (I think that Beat Happening's drummer, Bret Lunsford, is Jonn Lunsford's brother). The band released three albums (Jackpot, Brainwashed, and What Were Flames Now 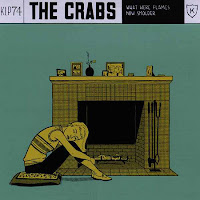 Smolder) as a duo, with Lunsford on guitar, Jackson on drums, and both sharing vocal duties. For their fourth album, Sand And Sea, issued in 1999, they added a new member, Sarah Dougher on keyboards, an addition which radically expanded the band's sound, without entirely changing it. Dougher's organ and harmonies with Jackson on Sand And Sea are brilliant, especially on tracks like "Bricks Of Gold" (another gem) and "I Surrender". "End Of The World" was off this last album, and it is truly the highlight.

Well, that song really got to me, to the point where every time I drove in that part of the state (which was fairly frequently, as I was doing well at the casino poker tables at that time), I would call WHUS to request the song. They almost always honored my request. About a year later, I called the station to make my usual request. The DJ played the song a few minutes later, then after it was over, mentioned on the air that "End Of The World" was probably the most requested song in the station's history! Hopefully it wasn't just me asking for it! Maybe other people heard it and, like me, were captivated enough to ask for it again and again.

The Crabs broke up soon after this last album was released. Nowadays, I understand that Lunsford works as an administrator for the Portland Parks Department, and is an outspoken and controversial environmentalist. Sarah Dougher has a PhD in Comparative Literature, and in addition to being a professor, has released several solo albums. Lisa Jackson? I have no idea what she's doing now.

This is the first in a series of comments on tunes that I own and have feelings about, either good or bad. I'll add more as the mood strikes me. Feel free to comment on this first posting, or suggest other tunes you'd like me to comment on. Thanks for reading!

Add comment
Load more...
Newer Post Home
Subscribe to: Post Comments (Atom)
Saying "Thanks" for the music you receive from here costs you absolutely nothing, and yet is worth quite a bit to me… If you can't bother leaving a comment on this blog for the first album/set we send you, don't bother making a request For a second album…