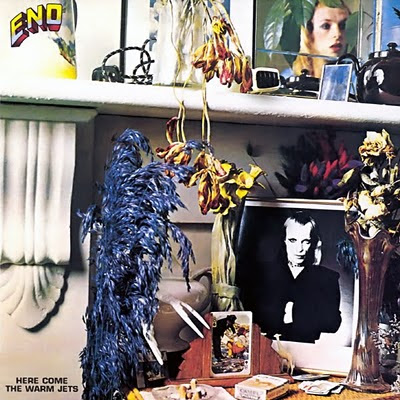 Brian Eno has been one of my favorite musicians for a long time now, but this was mostly due to his collaborative work with other musicians. He is rightly renowned for his work with David Bowie on Bowie's famous trio of Berlin-era albums (Low, 'Heroes' and Lodger). He played a similar role with Talking Heads, acting as the producer and virtual fifth member of the band (to the reported chagrin of Tina Weymouth and Chris Frantz) on their own trilogy (More Songs About Buildings And Food, Fear Of Music, and Remain In Light). In between all of that, he still found time to produce Devo's stunning debut My Life In The Bush Of Ghosts, a truly groundbreaking, ahead-of-its-time album that is one of my personal Top Ten records ever. 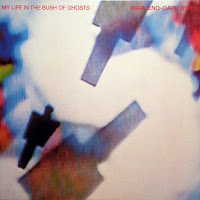 album and release, in collaboration with David Byrne,

But for a long time, Eno's solo work has left me kind of cold. Back in the 80's, I was a big Bauhaus fan, and their cover version of "Third Uncle" led me to Eno's Taking Tiger Mountain (By Strategy), the source of the original. But overall, that album did nothing for me, and from that negative reaction, I shied away from Eno's solo work for many, many years.

A few years ago, I was talking with a friend about Eno. The conversation initially centered on Bush Of Ghosts, which we both agreed was a masterpiece. When he began addressing some of Eno's early solo work, I told him about my reaction to Taking Tiger Mountain. He was stunned that I hadn't fully gotten into the whole Eno back catalogue, and the next day he sent me this album, Here Come The Warm Jets.

All I have to say about this album is . . . WOW. Here Come The Warm Jets was recorded in the immediate aftermath of Eno's departure from Roxy Music, where he had an acrimonious relationship with that group's leader Brian Ferry and was frustrated with the constraints of the band's glam rock sound. Warm Jets can almost been viewed as Eno's reaction to being released from those constraints, while also flipping a big middle finger at his former band, and Brian Ferry in particular (listen to Eno's vocals on songs such as "Cindy Tells Me" and "Some Of Them Are Old" - he appears to be purposely emulating Ferry's singing style!). But this isn't just a "taking the piss out of Roxy Music" record. Eno has some great ideas and melodies on this album, and even today this work sounds fresh and innovative. Some of my favorite tunes include the fantastic "Needle In The Camel's Eye", "Dead Finks Don't Talk", and one of the best songs of Eno's career, the dreamy, transporting "On Some Faraway Beach".

Here Come The Warm Jets reopened my mind to Eno's solo work. I gave Taking Tiger Mountain (By Strategy) another listen, after ignoring it for several years, and now found that it is nearly Warm Jets' equal. And from there, I began investigating his ambient works and later stuff like Nerve Net. All in all, Brian Eno is a fascinating, innovative artist, and his complete catalogue (both solo and with others) is worthy of review and appreciation.

If you don't own this album, I heartily recommend giving it a listen. You won't be disappointed. If anything, Rolling Stone ranked this one too low.