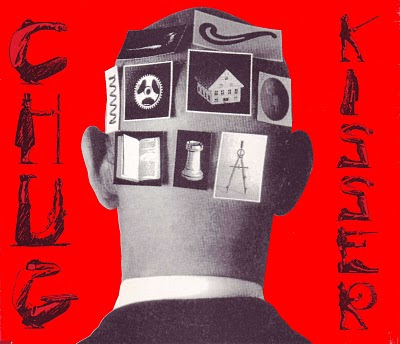 One hot and sunny summer afternoon in January 1994, I was driving past the Dux De Lux (near the Arts Centre in Christchurch) and listening to RDU, the student-run University of Canterbury station (and in my opinion, one of the best radio stations in the Southern Hemisphere). Suddenly, the station played this buzzy, frenetic guitar-and-drum-driven track that made me sit straight up in my seat. I remembered that it was the "Local Music" time slot at the station, so I waited anxiously to the end of the song to find out who the band was (RDU was and is good about IDing every note played, unlike a lot of other stations). Sure enough, the announcer said the song was "Flowers", by a band called Chug.


That was all I needed to hear. I immediately turned the car east, towards the center of town and most importantly, towards the two main music stores in the City, Echo Records and Galaxy Records, located just down the way from one another in the Cashel Mall area. Galaxy didn't have anything by Chug, but Echo had an EP, Kisser, with exactly the song I was looking for. Within ten minutes of hearing that tune, the CD was in my hand.

Chug was formed in 1991 in Dunedin, the birthplace of such well-known and acclaimed (well, in certain quarters) bands as the Chills and the Clean. They quickly signed to Flying Nun Records, and the Kisser EP was their first release on the label in 1993. They recorded an album for Flying Nun, Sassafras, in 1994, and another EP, Little Things, in 1996, before leaving the label for Alias Records in late 1996. Alias roped them into a seven(!)-album deal, which included a rerelease of Sassafras on the label and a new album, Metalon, in 1997. Both of the band's albums and both EPs went exactly nowhere.

Chug's major problem was that they could never keep a consistant lineup going, apparently a familiar problem for Dunedin bands (see "Chills, The"). No less that three different lead guitarists and three drummers passed through the band in its first four years of existence. That's what murdered them in 1995-96, just after Sassafras was released - they spent all of that time rehearsing with another new member, and by the time they were ready, their moment had passed.

The stresses of constant lineup changes, relentless touring, and that humongous record deal hanging over their heads caught up quickly with Chug, and by the end of 1998, the band was history. It's too bad that the band could never again put out anything as strong as "Flowers".

Epilogue: I moved back to the U.S. in mid-1995, and a year or so later, I was watching Nickelodeon on cable, for some ungodly reason. The network's "Coming Up Next" promo came on at one point, and I instantly recognized the background music - it was an instrumental snippet of "Flowers"! It was stunning to see that at least one person in the U.S. was hip enough to find that one cool song by an obscure band from New Zealand, and put it on TV (although I used to laugh to myself, considering what would have happened if Nickelodeon accidently played the vocal part, which prominently features the "F"-word - don't think the parents of the kiddies watching at that time would be too pleased . . . )