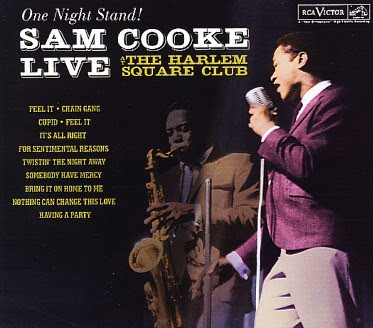 It has often been said that the best live album ever released was James Brown's Live At The Apollo (1962). A very close second, in my opinion, is Sam Cooke's One Night Stand: Live At The Harlem Square Club, recorded a year after James Brown's legendary album but (inexplicably) not released by RCA until 1985. If you've never heard this album, you are definitely in for a treat, and a shock.

Since his death in 1964, Sam Cooke's legacy has been that of the soulful crooner, the man who used his gospel-trained voice to smooth out the rough edges of the R&B of the fifties to create transcendent romantic ballads and radio-friendly teenage pop songs that appealed to both black and white. The constant replaying of his standards, such as "You Send Me", "Cupid" and "Another Saturday Night", to name a few, have served to reinforce this image. But in reality, Sam Cooke was a man of great artistic depth, with fierce passions and convictions. At the risk of losing his white audience, he was an early and vocal public supporter of civil rights. Late in his career, he focused all of his passion for equality and songwriting skill into the single "A Change Is Gonna Come", the greatest of all Civil Rights era songs.

Cooke was frustrated by the constraints of his contract with RCA, which all but required him to continue banging out frothy ballads and fluff like "Everybody Loves To Cha Cha Cha", songs that played to Cooke's white audience. But he had another audience that knew a different Sam Cooke than the one usually presented. His main contact with black audiences was in his tours of the small clubs and dance halls located mainly in the South, both on and off the old 'Chitlin Circuit'. On those tours, Cooke was free to ignore the restraints imposed on him by society and the industry, and allow his ferocity and power to burst through.

Live At The Harlem Square Club is the only recorded evidence of the 'real' Sam Cooke, the one that black audiences knew and loved. In his set at the Miami club in 1963, you can almost FEEL the heat and sweat in the joint, as he roars and tears through classic after classic, presenting them in a way you've never heard before. Once you hear his versions here of "Twistin' The Night Away", and especially "Bring It On Home To Me", you'll never listen to the originally recorded versions (the "pop" versions) the same way. He sounds more like Wilson Pickett than the Sam Cooke we've been used to.

Final word: this is an amazing record that presents a different, unfamiliar yet exciting side of a legendary artist. And is it a must-have. So here - take it: