The Chills - Heavenly Pop Hits: The Best of The Chills (and Ice Picks EP) 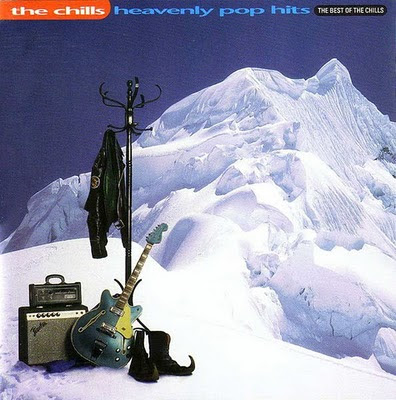 I'm disgusted with myself that I didn't get into this band when I first went to New Zealand.

I didn't know anything about The Chills until I returned to the U.S. from Christchurch and entered grad school in Virginia. One of my classmates there, Stuart, was a native New Zealand who was born and bred in Christchurch, but who had spent several years living and working in the U.S. Word had gotten around the school that there were "two Kiwis" enrolled (one real, one adopted), and after being introduced, Stuart and I discovered that we had several mutual friends in and around Canterbury. We became fast friends.

One day, Stuart (knowing what a Kiwi music fan I was) brought a couple of CDs to school for me to sample and evaluate. One was by the Bats, which really didn't do anything for me, I must say. But one of the others was Heavenly Pop Hits, a greatest hits compilation by The Chills. That was the one that really hit home for me.

The Chills were formed in Dunedin, New Zealand (home of the aforementioned Chug and The Clean) in 1980 by Martin Phillips, a talented musician and songwriter who formed his first band, The Same, in 1978 (his other claim to pre-Chills fame was that he played the organ on The Clean's 1981 debut single "Tally Ho", Flying Nun Records' first New Zealand hit song). The Chills cranked out several memorable singles in the early 1980s, including "Pink Frost" and "Rolling Moon" (both included here), but the band didn't release a proper album until 1986.

The band's long delay in putting out an LP can be attributed to two things: lack of money (Flying Nun wasn't exactly rolling in dough in the early '80s) and, more significantly, the failure to maintain a consistent lineup. Dunedin bands are notorious for this (see my earlier entry for Chug), but The Chills were the poster child for this type of band turnover. Since its inception, the band has gone through (at last count) nineteen different lineup changes, with Martin Phillips being the only constant member (sounds a lot like The Fall, eh? Although I understand that Phillips isn't nearly the tyrant and band dictator that Mark E. Smith is reputed to be . . .). Former Chills members have pollenated several other bands throughout New Zealand (including Straitjacket Fits, The Clean and The Verlaines) and the rest of the world (Justin Harewood ended up in Luna, and Martin Kean resettled in England and became an early member of Stereolab).

Such band turmoil, of course, led to sporadic releases, which is why Heavenly Pop Hits is so great, and so important. It collects all of the band's best songs in one place, a one-stop shop for a concentrated dose of what makes The Chills so superb.

Like I said, after listening to this album, I was kicking myself for not getting into them sooner. I could go through and tell you, song for song, why every tune is so outstanding. I'll let you find that out for yourself.

However, the thing I want to convey to you about these songs, and The Chills in general, is that they SOUND like New Zealand . . . It's hard to explain, really, unless you've lived there or spent any significant time in the country. But to me, every song brings back a time, or a place, or a feeling I had when I lived there. Listening to "Double Summer" reminds me of summers I enjoyed there; in "Doledrums", I can relate to some of the lethargic Sunday afternoons I spent in town.


I know I'm not explaining this well . . . But it seems that the essence of the country is contained in the words and music of this album. I consider The Chills to be the definitive New Zealand band.

But I'll let you listen for yourself and decide. Also posted here is the Ice Picks EP that was included with select editions of Heavenly Pop Hits - good songs here as well.

And here's the one for the Ice Picks EP: