I should have been a Stereolab fan long before I actually became one, but for some reason the band and I never connected up.  They had long been on the periphery of my consciousness, but it took years for the connection between us to be made. 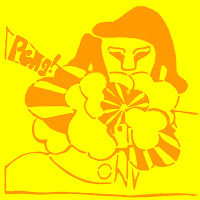 Oddly enough, I had the opportunity to be into Stereolab from nearly the very beginning. The band made their first U.S. appearance in the fall of 1992, with a week of shows in selected clubs on the East Coast. After their debut gig at the Knitting Factory in New York and a follow-on performance at the legendary Maxwell's in Hoboken, New Jersey, Stereolab travelled to the Nation's Capital for a show at the 9:30 Club on the evening of Sunday, October 25th. That afternoon, however, the band had scheduled an in-store performance at Vinyl Ink Records in nearby Silver Spring, Maryland, playing stuff off of their debut LP Peng!

I was actually in the store that very afternoon, a couple of hours earlier, trolling for CDs to replace some that had recently been stolen out of my car while it was parked overnight in my 'secure' apartment garage in Arlington (those thieving bastards took some great stuff - early import copies of stuff like The Fall's Dragnet and The Smiths' Hatful of Hollow - things that ended up taking years to replace). I messed around at Vinyl Ink for about an hour or so, but couldn't find anything I was looking for. I noticed the flyers around the store announcing the Stereolab gig, and I know I walked by the open area of the store where they would be playing several times during my visit that day (the mikes and cords were already set up). But I had no idea who the band was at the time, and didn't know a thing about their music. Plus, I didn't feel like hanging around Silver Spring all day . . . so I bolted. In hindsight, I made a big mistake.

It was years later that I began getting into the band. While on my grad school internship up in Cambridge, Massachusetts during the summer of 1996, I went to a show at TT The Bear's Place in Central Square that featured three bands, including the headliner The Kelley Deal 6000.  I enjoyed the music so much that over that night and the next day, I acquired the latest releases of all three, including The Laurels and Trona. Although at the time I didn't like Trona's album as much as I hoped I would, one song on it stood out - "Wow And Flutter", which I soon discovered was a cover version of a Stereolab song. After this revelation, I quickly ran out to find the source of the original - 1994's Mars Audiac Quintet, which I tracked down at the old HMV store in Brattle Square, near Harvard University. 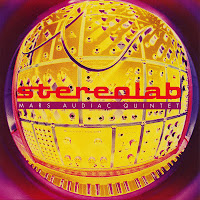 With the first listen, I became an instant fan. Songs like "International Coloring Contest", "Ping Pong" and "Fiery Yellow" helped carry me through that summer. It was the music itself that first drew me in; It took me a little while to fully comprehend the Gallic-inflected, politically-charged lyrics of French-born lead singer Laetitia Sadier.  But I was jazzed enough about this band that I immediately set out to acquire their back catalogue. 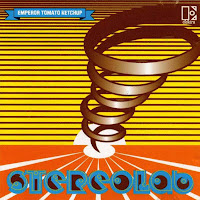 The first of their past albums that I purchased was their most recent one (for that time), Emperor Tomato Ketchup, released in April 1996. I couldn't have picked a better one to stoke my Stereolab fandom - Emperor Tomato Ketchup was the first album where the band began to expand its musical horizons and move away from the "drone" rock that had been the hallmark of their earlier albums. On this album, Stereolab ventured into the realms of hard rock ("The Noise Of Carpet"), hip-hop ("Metronomic Underground"), funk ("Spark Plug") and dance music ("Emperor Tomato Ketchup"), while still retaining the group's unique sound and flair. I thought practically every song on this album was fantastic, but it was through the ones that became my particular favorites ("Cybele's Reverie" and "Les Yper Sound") that I first became more completely aware of the vocal byplay between Sadier and backing vocalist Mary Hansen.

Mary Hansen was born in Brisbane, Australia in 1966, one of eight children of a member of the Australian parliament and his wife, a former opera singer. Mary's early life was fairly uneventful; she graduated from high school at 17, and for a while worked at a bank and other businesses in and around the Brisbane area. Tiring of her routine life in Australia, Mary moved to London, England in 1988, where she began dabbling on the fringes of the local music scene there.  She soon became a 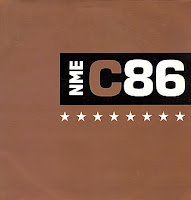 backing singer for local indie rock artists The Wolfhounds (one of their songs was included on the celebrated and influential NME C86 cassette compilation in 1986).

At a show in 1989, The Wolfhounds opened for the band McCarthy, at the time a big name in English indie rock. Hansen met McCarthy guitarist and band founder Tim Gane at the gig, and they quickly became friends. Gane broke up McCarthy soon after that aforementioned gig, and with his girlfriend Sadier and transplanted Kiwi musician Martin Kean (briefly a member of New Zealand's The Chills) began working on a new project that quickly evolved into Stereolab. Gane didn't forget his new friend, though. He invited Mary to join the new band just before the band's first recordings; by the time Stereolab's first LP, Peng!, was released in April 1992, Mary was a full-fledged member, playing guitar and keyboards and contributing backup vocals.

Hansen's voice was the perfect complement to Sadier's; their singing styles and vocal range were very similar . . . but different enough to add nuance and color to many of the band's songs. Those two songs I mentioned above, "Cybele's Reverie" and "Les Yper Sound", were the ones that first hooked me on the depth and quality of their intertwined voicess. But as the years passed and my Stereolab fandom (and collection) grew, I found many more examples of this byplay that I fell in love with: "Sadistic" and "Lo Boob Oscillator" from Refried Ectoplasm, "Miss Modular" and "Refractions In The Plastic Pulse" off of Dots & Loops; "Captain Easychord" from Sound-Dust. By the early 2000s, Hansen and Sadier had all but perfected their unique 'sing-song' style of vocal counterpoint and harmony that helped establish Stereolab as one of the best, most influential bands of the era. As far as I was concerned, "The Groop" had never put out a bad song, and I looked forward to each new release every year or so. 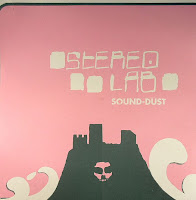 Stereolab released Sound-Dust in late 2001, and in 2002 they began preparing for their next album by building their own studio in France. There was a little band friction over that summer, as Gane and Sadier ended their long romantic relationship. But they elected to remain together as band mates, and keep Stereolab going as an operating concern. As a lead-up to commencing recording of their next album in their new home, in October their label released ABC Music: The Radio 1 Sessions, a compilation of the band's live recordings over the years on the BBC. At the end of that year, the group was preparing to leave London and relocate to Bordeaux for their next recording session. All in all, things were looking pretty positive for the band.

On the afternoon of December 9th, 2002, Mary Hansen was killed when a truck backed into her while she was riding her bicycle near London's Finsbury Square.

At that time, I was reading a lot of online news, regularly reviewing major domestic and international Internet sources like the New York Times, Los Angeles Times, SkyNews and Reuters. I came across the news of Mary's death while browsing the December 10th version of BBC News, and I was just . . . stunned. It seemed unreal, and unfathomable. I never knew much about her private life or personality - all of the members of Stereolab were enigmas in that regard, offering up few personal details in their music and interviews. But Mary's loss was a significant blow to me. What I knew of her, I knew through her music . . . and now the source of that music was no more, gone in an instant. It was hard to wrap my head around it. The jolt I received from her death was just as great as the one I received less than two weeks later, when the sudden death of The Clash's Joe Strummer made international headlines.

Stereolab was just as stunned as their fans were; the band went on a long hiatus as its members grieved for their lost friend. But near the end of 2003, Stereolab began to regroup, and by that fall had released their first post-Hansen recording, the Instant 0 In The Universe EP. The band continued releasing albums and EPs up until their breakup in late 2009. I quite enjoyed all of these releases, including long-players like 2004's Margerine Eclipse (essentially a Hansen tribute album) and 2008's Chemical Chords, and I attended a couple of the band's tours during that time. But as good as the music continued to be, there always seemed to be something . . . missing from late-period Stereolab in terms of their musical approach - and that missing piece was the small but essential contribution Mary Hansen made to each and every recording.

Hansen had a very active musical life outside of Stereolab, recording vocals on releases by Mouse On Mars and The High Llamas, and teaming up with members of Seattle band Hovercraft to form the space-rock collective Schema (which released an EP in 2000).  But very little of Hansen's own music was available until 2005, over two years after her passing, when her friends gathered up the few recordings she had made on her own and released them on the EP Hybird. The disc (featuring Hansen's own artwork) contains three songs that she completed before her death, plus a fourth previously unfinished track that was completed by her old Stereolab bandmate Andy Ramsey. The music is infused with the signature 'Stereolab sound', but filtered through Hansen's own musical esthetic. The best track, in my opinion, is "Twenty Feet Behind", a gentle, swirling wash of organ, xylophone and drums, suffused with Mary's signature "Ah-ahs" . . . beautiful.


But I'll let you hear the rest for yourself and come to your own conclusions. Here, for your listening pleasure, is the only solo release by Stereolab's Mary Hansen, the Hybird EP, released posthumously on Horizontal Records on February 18th, 2005. Have a listen, and as always, let me know what you think.