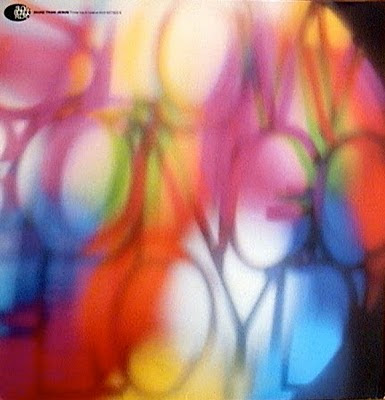 Speaking of more insane Madchester nonsense I acquired back in the day . . .

Here's another one from that era, Slow Bongo Floyd's More Than Jesus EP, released in 1991 on Epic Records.


Slow Bongo Floyd was a minor Manchester band, formed in the immediate wake of the Stone Roses' success (see previous posting). The band was essentially the brainchild/project of local musician Mick Jones (no, not the Clash's Mick Jones - this is another one), assisted by a rotating group of friends and fellow musicians. Slow Bongo Floyd went beyond what The Stone Roses started, and sowed that thumping house groove a little deeper into their music than some of the other Madchester bands (with the possible exception of The Happy Mondays). It's conceivable that this sound should have carried them at least as far as it did the Mondays, but alas, the band was destined to coexist on the fringes of the movement.

I can't remember where or when I first heard this song; it was probably at once of those old dance clubs in Washington DC on F Street. I know I did purchase it from the now-defunct GWU Tower Records the year it came out (too bad Tower went belly up, but it wasn't my doing. I estimated once that in my lifetime, I probably purchased at least 60% of the scores of tapes and hundreds of CDs I own from Tower, with the vast majority of those coming out of the place in Washington).

Slow Bongo Floyd was active for a fairly long period, from about 1989 to early 1992. But strangely, any detailed information on the band is VERY hard to find nowadays. It's weird that in this day and age, they remain somewhat of a mystery.

So, that's all I've got on these guys - not a lot. But I know you're here for music, and not information. So here you go: