World Of Pooh - The Land Of Thirst 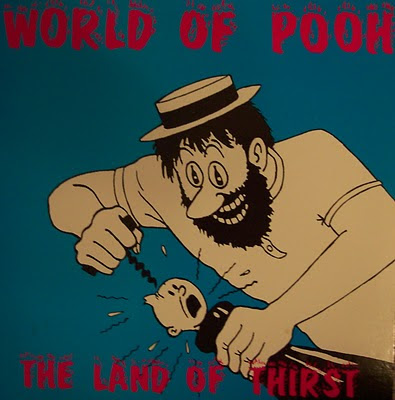 World of Pooh was an extremely short-lived experimental/indie/alternative/post-punk band based out of San Francisco in the late 1980s (I classify the band under so many heading because in a lot of ways, it really didn't fall under one particular category . . . but I digress). The band was one in a long series of stops for seminal San Fran indie musician Barbara Manning. In 1987 she joined forces with Brendan Kearney and drummer Jay Paget (later of Thinking Fellers Union Local 282), and for two years they were in the semi-forefront of the Northern California indie scene. I won't go into the history or anything regarding World of Pooh or Barbara Manning in particular; better men than I have already scraped together the few scraps of information on this band in other places, such as here.

Suffice to say that I am a big Barbara Manning fan, and over the years have collected just about every recorded noise she's ever been associated with, either as a solo artist, with 28th Day, World of Pooh, the San Francisco Seals, and with the Original Artists. And, like another semi-unknown musician I'm a fan of, Lisa Germano, Barbara Manning is someone who I probably ran into once or twice in my life, without realizing it. From what I understand, Manning used to work at one of the used record stores on Haight Street in SF that I used to frequent quite often in the '80s and '90s (I'm not sure where she worked, or when, but it was around that time). And Lisa Germano worked briefly 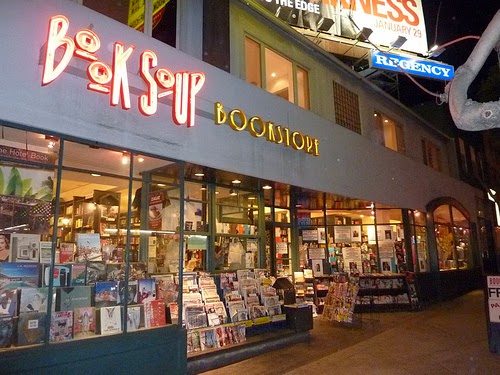 at Book Soup on Sunset Boulevard in LA (right across from Tower Records) at a period when I was making brief visits to LA for work, and frequenting that store when I was there (note that in both cases, this was before I was into either musician, so it's not like I would have lost my mind or anything if I saw their name tags or something).

The first time I had ever heard of World of Pooh was while reading the Trouser Press Record Guide sometime in the early '90s. Now many of you may have forgotten or don't even know this, but in the pre-Internet, pre-Allmusic.com age, thick books like the TPRG were the best sources available for information and reviews of various bands, records and genres. I'm pretty sure that All Music also had a book out around that time, but I preferred TPRG, because it specialized in covering really obscure New Wave and alternative bands. For example, they had a great section of the complete works of Suburban Lawns and Frank Sidebottom (God rest his soul), and scholarly dissertations on the likes of Wall of Voodoo and Romeo Void. Not all of the information contained in TPRG was on target (one of the earliest editions I have came out soon after the Red Hot Chili Peppers' first (and then only) record - the book dismissed the band as destined to be short-lived flashes in the pan . . . ), but it was always great and entertaining. No matter how many times I went through that book, the next reading always revealed something new.

Anyway, TPRG had a small section on the collected works of Barbara Manning, and devoted some space to World of Pooh and their legendary lone album, 1989's The Land of Thirst. The book's near-mythic description of the album immediately piqued the interest of a collector of obscure music treasures like me: supposedly, only 1,000 copies were ever printed, by a mysterious record label (Nuf Sed Lubrication Inc.) located at a non-existent address in SF. I'll quote the book here:


"The group's sole album . . . commands high prices from collectors, and with good reason: it's a magnificant record. The terrible tensions within the band are hidden by wan melodies but come out in the brutal lyrics [publisher's italics] . . . "

Apparently, Manning and Kearney had been dating for a while, and by the time the record was being recorded, their relationship was on the rocks. They took out their relationship strains not directly on one another, but like most other couples with problems they addressed their angers and frustrations with one another indirectly, in their case through the songs (I understand they broke up soon after this record came out - which makes sense, since the band also ceased to exist around that time).

With that kind of praise, and that level of obscurity, I knew I HAD to get a copy. Thus, the odyssey began. For years, I scoured the bins of every hole-in-the-wall record shop in every city and country I found myself in. I subscribed to mail-order catalogs and record shoppers guides, and tried to make friends with music wholesalers who, I thought, might give me the inside scoop on how to find such a treasure. I made long-distance calls to retailers in London, Sydney and California, following up on vague rumors of the record being in their possession. I did EVERYTHING to find it, to no avail.

Fortunately, technology caught up with me. Specifically, the Internet happened in the last half of the 1990s, and the search became much less onerous. Less onerous, but not any easier. I still had no luck in tracking The Land of Thirst down. It apparently was as obscure as TPRG said.

Then, a miracle happened. One day, while doing a random search for the record in Google, it popped up as an item for sale on eBay. I had checked eBay countless times, but with no luck, and figured that this lead would also prove fruitless. But, lo and behold, when I checked, there it was, just put up for auction, with no bidders after 3 days. I couldn't believe it! My hands were actually shaking as I put in my bid, a hefty amount for me at the time. I figured that, with no bidders after 3 days, I would win the auction with a fraction of my top price. But apparently, like me, there were several others who had been searching for this World of Pooh record who had just stumbled over it. My lone bid soon turned into an all-out bidding war! I monitored that site hour-by-hour, and during the last day, minute-by-minute, to ensure that I put the final, winning amount in for this obscurity. And as the final second in the auction ticked away, and other potential buyers amped up their prices, I countered and recountered until, at the end, I reigned supreme - The Land of Thirst was mine, finally!

It was nine years almost to the day that I first heard about the album and started looking for it.

Usually when you wait for something this long, it turns out to be a major disappointment. I was semi-prepared for that, as I waited for the seller to send me my package. When it arrived (very securely and rigidly packed - the seller apparently knew its worth), I took it out of its box, carefully placed it on my turntable, and listened to both sides, all the way through.

And for once, TPRG was right - The Land of Thirst is an outstanding album. As good as the songs are, the underlying tension beneath each of them, due to Manning's and Kearney's situation, is palpable, and brings a razor-sharp edge to all of them. The epitome of this lyrical edge is in what I consider the album's centerpiece song, "Mr. Coffee-Nerves".

In actuality, Mr. Coffee-Nerves was a villianous cartoon character created by the Postum Decaffinated Coffee people back in the 1940s and 50s. He was the spiritlike presence that appeared whenever people drank shitty non-Postum coffee, the kind that caused people to get jittery, irritable at family members, and just plain jumpy - "coffee nerves". Here's a place that has a number of the cartoon ads that Postum published, featuring this character (the accompanying commentary by the author of this site is equally hilarious).

In the song, the singer (Brendan) describes the events in this life with his (unnamed, but we all know who she is) lover as driving him to the same level of irrational irritability. "The house is like a waiting room, and waiting always puts me on edge - the slightest sound may set me off". "I can't sleep, it's three a.m; you're rolling close to me again - stay away, your flesh disgusts me". And the chorus between each verse is brutal: "Seems that fear always closes our eyes as we connect the dots" - he's too afraid of the consequences of realizing and articulating his dissatisfaction with his relationship, so he chooses to just live in this horrible atmosphere, getting more and more agitated with no apparent way out.

In addition to the cold. biting lyrics, the things that make this song so devastating are:


1) the relentless, ticking-clock beat and nagging guitar, which all but make you FEEL the tension the singer is under;
2) the fact that Brendan sings the song not with anger, but in an indifferent monotone that signals his complete lack of affection for or interest in his partner; and
3) Barbara Manning joins him in the monotone "la-la-la-la" chorus - she had to know the song was specifically about her and the way her boyfriend felt about her.

The complete song is just crushingly effective . . . and yet it's a brilliant song, one of many on the album.

Sadly, The Land of Thirst has never been released on CD, and as far as I know, there are no immediate plans to do so, despite much yip-yap about it over the past fifteen years or so. As happy as I am to have such a rare piece of music in my possession, I still would like for everyone to hear it, and discover how brilliant this band was, and Barbara Manning is and continues to be.

And thus, here you are, carefully cooked off of my treasured and pristine personal vinyl copy: